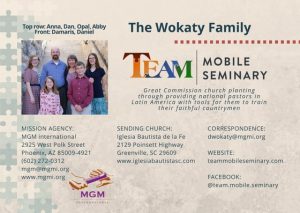 WE ARE THE WOKATY FAMILY

When we lived in the U.S. previously, hardly a week went by that we did not receive a phone call during mealtime. Because we have a strange last name (wah-kuh-tee), we immediately recognized whether the person on the other line was someone we knew. With our hectic schedules, we usually tried to get to the point of the conversation so we could address it efficiently. Although we do not wish to compare ourselves with phone solicitors, we understand that you may not know who we are. We would like to introduce ourselves so that we will no longer be strangers!

Dan. When I was three or four, I made a profession of salvation, and relied on my profession for many years. Later, I realized that I had never truly put my trust in Christ. On November 25, 1990, I put my trust in the Lord Jesus Christ. That evening at my church I was baptized. After high school, I went to Bob Jones University to study business. During my second year at BJU, the Lord began to reveal to me that He wanted me in full-time ministry.  Later, I realized that He was calling me to preach, and I surrendered to that call on March 26, 1993. When I realized that God was calling me to a Spanish-speaking country, I changed my major to Missions with a Spanish minor. I graduated in 1996, and began to pursue a Master’s degree to better equip myself to train Mexicans to fulfill the call to the ministry.

I began attending Iglesia Bautista de la Fe in Greenville, South Carolina (our sending church) at the end of 1993. There, I served in the church as choir member, sound man, music director, Sunday School teacher, and teacher of our church’s Bible institute. After Opal and I were married in 1997 she became involved in the music ministry, playing the piano and organ.

In the early part of the summer of 2001, we moved to Hermosillo, Sonora, Mexico, where we served at the Instituto Práctico Ebenezer y Seminario, or Ebenezer Bible College and Seminary, and Iglesia Bautista Emanuel, or Emanuel Baptist Church (Ron Cochran, pastor) until 2018, when we began our second traditional furlough. We now base ourselves out of Greenville, SC to travel throughout Latin America through TEAM Mobile Seminary with pastors and teachers from the U.S., to help national pastors get more training and start local Bible training centers.

Opal. When I was five years old, I accepted Christ as my personal Savior. At the age of eleven, I responded to an invitation after hearing a missionary speaker, and yielded my life to be a missionary wherever the Lord would lead me. But as I grew older, I stopped reading my Bible as the pull of my flesh grew stronger. I lost fellowship with God as a result, and soon began to doubt my salvation. It was not until after college that I finally made things right with the Lord and He began to really change my life.

I met Dan on a soul-winning trip to the Olympics, and once again God called me—this time to be the wife of a missionary; and the Lord gave me specific direction as to a field of service—Mexico. In preparation for the mission field, and as an exposure to the language and culture of Spanish-speaking people, we attended Iglesia Bautista de la Fe, where the Lord allowed us to be involved in the music ministry and Sunday School. After that, the Lord directed us to go to Instituto Práctico Ebenezer y Seminario, to have a teaching ministry there. I taught Music Theory, and a number of private piano lessons, as well as piano classes.

We have four wonderful children!